From our Collections – At the farewell of Nevenka Koprivšek, the first lady of non-governmental performing arts production in Slovenia

We are presenting our collections. In March 2021 we dedicate to Nevenka Koprivšek, at the recent farewell of the first lady of non-governmental performing arts production in Slovenia.

If we were to point out the name of the person responsible for the international promotion and the continuous development of the Slovene non-institutional production in the field of performing arts, it would undoubtedly be NEVENKA KOPRIVŠEK (1959–2021). Initially an actress and director – she graduated at the international school of Jacques Lecoq in Paris – she took over the artistic direction of the theatre Glej after returning to Slovenia, started to introduce contemporary dance choreographers (Iztok Kovač, the group Betontanc) and internationalized it. In 1990 she presented the intimately-urban theatre project You – The City of the guest director Fiona Templeton (in the photo on the right Nevenka Koprivšek, with the actress Olga Grad on the left).

In 1997 she founded the Bunker Institute and inaugurated the international festival Young Lions the following year; she took care of the festival edition even in 2020, the difficult year of the pandemic. With the Bunker platform that has since 2004 been managing and programming the contemporary performing arts space of The Old Power Station – Elektro Ljubljana, she co-founded several international networks and was actively involved in many national and international cultural projects; her outstanding work was recognized and awarded by a number of impor tant prizes.

Nevenka Koprivšek, thank you for your lion-hearted production acts and the vigorous festival-shaped creative hub and meeting place!

From our Collections – March 2021 Poster: 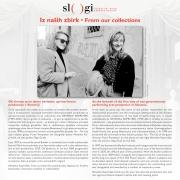 From our Collections – Equus, the first professional theatre direction of...

From our Collections – 300 years of Škofjeloški pasijon Scroll to top